As the Wild Pair Queen Street store neared its 20th anniversary the store owners wanted to update and refurbish it to keep it in line with their current fit-out model.

They also wanted to give it a slightly ‘rawer’ edge than their typical mall shop as well as combine it with their Lippy brand. The two-storey shop, located in a 100 year old building, had to be refitted in a very short time-frame on a very tight budget with only a one week shutdown.

Studio Gascoigne took aspects of the latest Wild Pair/Lippy model, such as the use of various ‘found’ objects and memorabilia but adapted a more pop-up aesthetic. Old furniture was sourced and re-purposed to the point that most of the fit-out is recycled or from Trade me. Ceiling panels were covered in old ‘girlie’ magazines while old photos, various religious icons and risqué images were scattered around. The idea was to create an interior that would feel genuine to customers rather than just another shop full of taken ‘old stuff’.

The ottoman was re-upholstered in op-shop jeans. All new joinery units were made on site from boxing-grade timber and positioned semi-randomly. The fabulous plaster ceiling was painted and up-lit. Old rough-sawn rimu tongue and groove covers old counters.

Every detail was carefully considered to make this a genuine collection of ‘stuff’ that would resonate with the customer and had meaning for the client, as well as being low cost. Second hand angle poise lamps act as cheap directional spotlights and along with joinery secured by G-clamps allows the client to constantly remake the store.

While it is tempting in this ‘pop-up’ type of fit-out to opt for neutral finishes and very raw surfaces, the aim was to add some fun to the interior with minimum cost. Paint colour was the best way to achieve this so a variety of bright Resene colours – Resene Hive (golden yellow), Resene Smitten (fuchsia pink), Resene Reservoir (pastel aqua green), Resene Zephyr (breezy blue) and Resene Pursuit (racy orange) – that clashed and complemented the memorabilia were chosen. 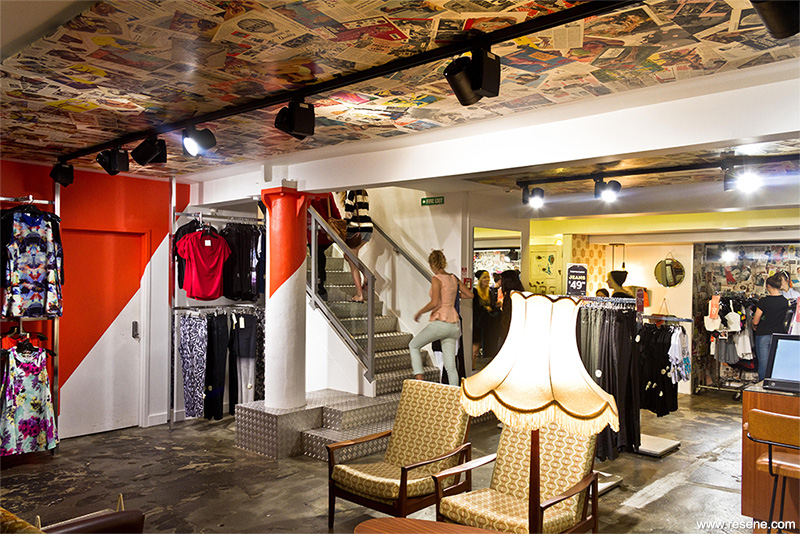 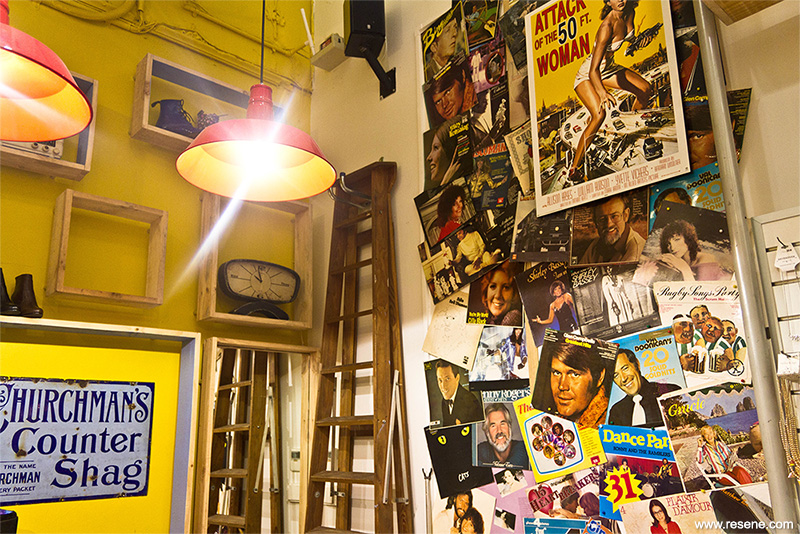 These were focused on clearly defined spaces so as not to overpower the merchandise. The use of colour is quite random and unexpected to enhance the eclectic mix of merchandise, memorabilia and the store’s original features.

Wild Pair had a beautiful 100 year old ceiling which was uncovered, in a very poor state, during the original fit-out. As the budget didn’t allow for restoration, it was simply painted white, up-lit and the texture speaks for itself. To complete the look, the patched floor was stained white. 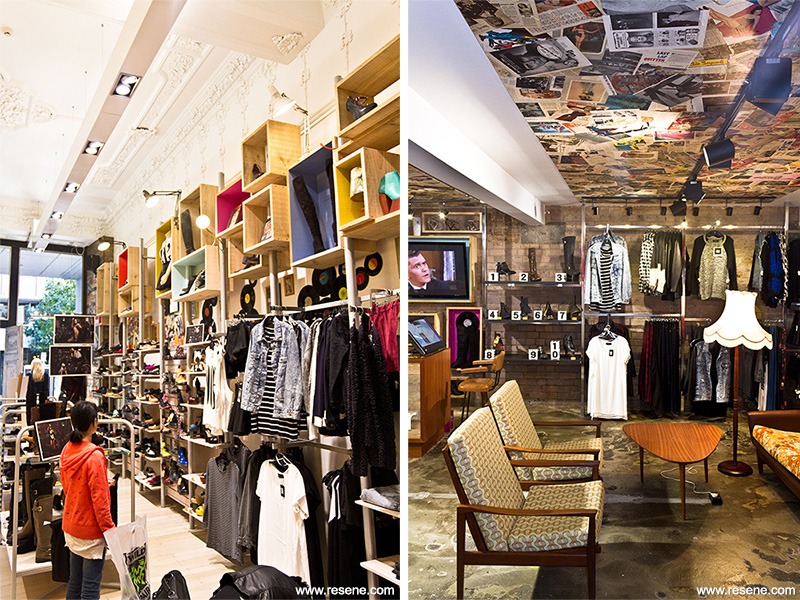