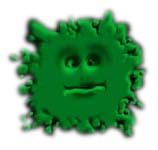 On painted surfaces, mould looks like dirt, and frequently the two cannot be visually distinguished.

The most common species are black, but others can be brown or green. By wetting the surface and rubbing, mould will show up as slime.

Mould is a major cause of paint disfigurement. It destroys the paint's fresh clean appearance, and if left unchecked it shortens the life of the paint film. Unless removed within a few months of its appearance, mould penetrates the body of the existing film and once firmly established, will grow through subsequent paint coatings, impairing adhesion and ruining the appearance of the paint work.

What to do:
Thoroughly clean down to remove all loosely adhered material. Treat areas of moss or mould infestation with Resene Moss & Mould Killer, correctly diluted (see pack) with clean water. As soon as the mould has been completely de-colourised (which indicates it has been killed) wash thoroughly with clean water to remove residues.

Once the moss and mould is completely removed and the surfaces have been correctly prepared, proceed with the Resene recommended paint system.