The intention was to transform the tired appearance and highlight their form on Sydney Harbour, while reflecting the creative nature of the occupants.

Waterview Wharf Workshops was originally a ship repair yard from 1905 to 1970. The maritime industrial buildings are an iconic landmark on Sydney Harbour and are listed as an item on the State’s Environmental Register. The heritage buildings are prominent and large forms on the harbour foreshore. They have been conserved and adapted for creative uses such as architecture, interior design, photography, sound recording and advertising. The interiors are open-plan warehouse with hardwood post and beam construction, featuring the original industrial machinery and fittings and a character of the Edwardian era.

The exterior paintwork had deteriorated and the buildings needed repainting, presenting the opportunity for a new colour scheme. The intention was to transform the tired appearance and highlight their form on Sydney Harbour, while reflecting the creative nature of the occupants.

The traditional green and cream colour scheme although safe, was bland, tired and outdated and the buildings were in need of revitalising. Similar heritage sites and waterfront warehouse structures from around the world were researched such as those in Trondheim, Norway and Nyhavn, Denmark, as well as numerous sites in Italy and South America. These bright and colourful palettes are recognised internationally. Given the similarities between Waterview and other landmarks, a similar approach to colour was adopted.

The process of deciding on the precise colours was difficult and its evolution slow. Over a hundred different Resene testpots were supplied and applied to various buildings. Response to the sample colours was sought from a number of the occupants, including architects and designers, and all and sundry that had an opinion. As a result the final colour scheme, Resene Biscay (stormy blue), Resene Clockwork Orange (bold orange), Resene Awol (willow green), Resene Silver Aluminium (sliver metallic), Resene Galliano (sweet yellow) and Resene White trims, brought into account the views of a wide community.

All the buildings are colourful except the last building which is a more modern steel and glass structure that is less prominent and recedes from the harbour. This is painted primarily black and Resene Silver Aluminium.

The building fabric is galvanised iron and they sit directly on the waterfront with a westerly aspect. The hot sun causes the galvanised iron to heat and woodwork to deteriorate at a quicker rate than normal. The work involved extensive preparation and replacement of timber components, requiring a carpenter and painter working as a team, at height on scaffolding. Resene paint was recommended and on sampling, the painters advised it had superior body and coverage. Resene Hi-Glo gloss waterborne paint was used due to the operation of the elements, with Resene Sonyx 101 semi-gloss waterborne paint on trims. 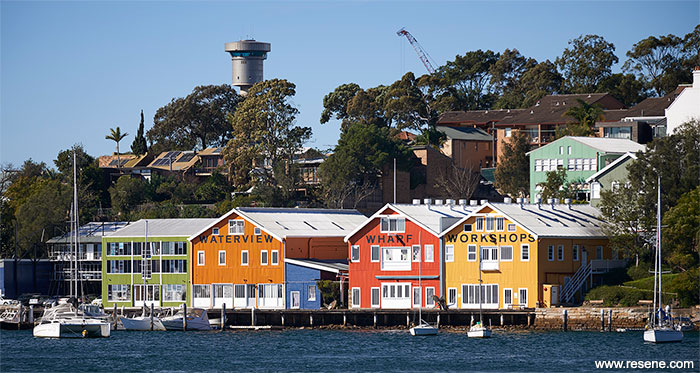 It’s amazing the difference paint can make. From safe, bland, tired and outdated, this project has used paint to present an exciting exterior through the use of paint colour. Prior to painting, the old warehouses simply blended into the landscape and scarcely rated a second glance; now they are eye-catching and are a new landmark on the harbour. Drawing inspiration from international maritime palettes and undertaking extensive work locally to consult on the colour choices, this colour palette is very carefully thought out and implemented. It has resulted in the absolute transformational nature of the buildings and provides connectivity to its surroundings.

The related colourful palette is used perfectly to highlight the unique forms of the building. Symmetry and connectivity is created with a real play on how to manipulate colour to both bring forward and recede. A perfect example of how to make paint colour work for you.

From anonymous, shabby and ordinary to simply extraordinary, this is a new iconic view on the harbour; you just have to stop and look.”