The story of New Zealand's own paint company

Resene was started in 1946 by an Eastbourne builder, Ted Nightingale, who needed an alkali resistant paint to cover his concrete buildings.

Help us find our history
Please share your memories, photos and stories about Resene

There was nothing available at the time, so in typical kiwi style he developed his own - in a cement mixer in his garage! In response to demand from other builders, Ted commenced producing his paint on a commercial basis under the brand name Stipplecote.

Stipplecote was a cement based paint required by builders because there were really no paints on the market at that stage that were suitable for use over concrete. Waterborne paints were not available until years later. As well as Stipplecote, Ted manufactured a range of admixtures, such as No Bond and Curecrete, which are still around today. The initial garage production facility was superceded by the establishment of Resene’s first factory in an old stable in Tinakori Road, Wellington later that year.

In 1951, Ted Nightingale launched the first waterborne paint in New Zealand under the brand name ‘Resene’ - a name derived from the main ingredient of paint - resin. This launch was followed in 1952 by company registration under the name Stipplecote Products Ltd and a move to a new larger factory in Kaiwharawhara, Wellington. A period of innovation was to follow.

The market eventually responded to the new paint technology and Resene’s perseverance paid off with a period of rapid expansion during the late 1950s and early 1960s. As the emphasis shifted away from cement based paints towards waterborne paints, the company name was changed to ‘Resene Paints Ltd’ in 1977. Although the company had added a line of solventborne paints to the range in the late 1950s and early 1960s, waterborne paints remained its primary focus.

By this time, the directors realised Resene had gone as far as it could with its limited manufacturing unit and selling structure.

This laid the foundation for several key decisions that in hindsight proved pivotal.

The first decision was to upgrade the manufacturing facilities to provide increased factory space. Resene shifted premises from its older site in Kaiwharawhara to Gough Street in Seaview, Lower Hutt, where it remained for 25 years before shifting to its current location in Naenae, Lower Hutt in 1992. By relocating to the Seaview site, Resene became situated in an industrial area, which later provided for further expansion with a second manufacturing unit a few blocks away. 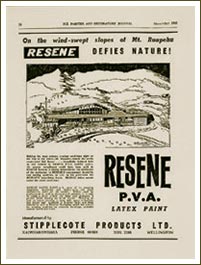 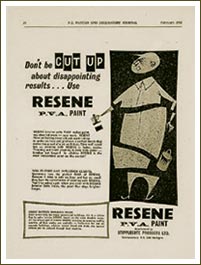 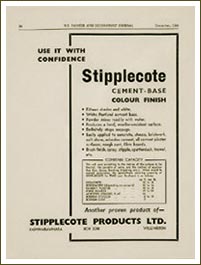 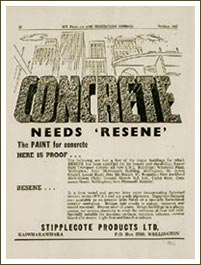 A series of early advertisements showing the benefits of innovative Resene waterborne paints.

The second and probably most crucial decision in Resene company history was to completely overhaul the company’s marketing. In a huge gamble, Resene decided to risk alienating the industry’s traditional sales outlets by sidestepping them in favour of using its own staff to sell directly to the trade.

In 1970, Resene employed a sales manager and set about opening branches throughout New Zealand. Initially each branch consisted of a warehouse as a base and a sales representative who drove around making calls on tradespeople. At about the same time the practice of leasing motor vehicles came into being and this allowed Resene to set up a fleet of vehicles without a huge capital outlay.

Resene initially focused on the professional market in Wellington and then rolled this strategy out to focus on towns like those in the Hawkes Bay - areas where the big companies were less focused. Only once Resene had established itself in most smaller areas, did Resene increase its focus on Auckland.

In between calls to tradespeople, the Resene sales representatives called on the architectural profession, Government Departments and local bodies. As a result of favourable dealings, many began to specify Resene paints on contracts.

In 1972, Tony Nightingale, Ted’s son, took over the operation of the company.

1975 saw the launch of the first of a national chain of retail stores. The move into retail occurred almost by accident. Tony bought a wallpaper company that happened to own a store in Marion Street, Wellington. It was at this site that the first store, originally called the Marion Street paint shop, was established. Following overwhelming success with the opening of this store, the ColorShop concept was conceived and duplicated in other regions. Soon there were ColorShops in Auckland, Hawkes Bay, Dunedin, Hamilton and Christchurch.

Despite this foray into retail, the mainstay of Resene’s business has continued to be specifiers and professional painters who demand a high quality paint that is easy to apply, a wide range of colours and a high level of service and problem solving ability from the paint manufacturer.

Resene has been privately NZ owned and operated since it first started in a Wellington garage in 1946. Learn more about Resene and take a short site tour.  We have opportunities available to sell our products in other regions, register your interest here.

Resene also built itself a reputation as the colour leader, with a number of firsts in this area: 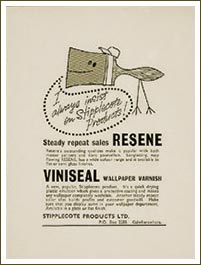 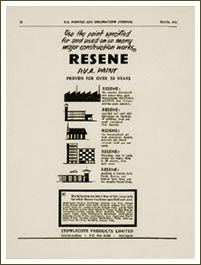 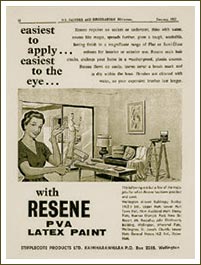 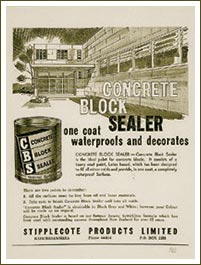 Continued: A series of early advertisements.

Throughout this time, Resene has also been known as a leader in the development of environmentally friendlier products from the basic innovation of Resene waterborne paints to the removal of lead from decorative paints in the late 1960s well ahead of other manufacturers.

To reinforce this position, Resene joined the Environmental Choice programme in 1996, making it easier for consumers to select paints that ease the burden on the environment. The relatively recent innovation of waterborne enamels has enabled customers to substitute waterborne products for solventborne products. In 2004 Resene introduced the Resene PaintWise paint and paint packaging recovery programme, the first comprehensive paint and paint packaging product stewardship programme in this part of the world. Over 3 million paint containers have been recycled and over 250,000 litres of recycled paint has been donated to communities to cover graffiti. 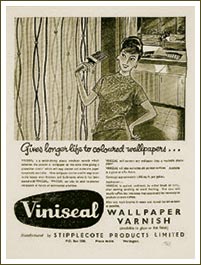 Resene produces both decorative and protective coatings for residential, commercial and industrial needs. Protective coatings technology was first purchased in 1977 from Giant Products. In 1999 Resene developed and released its own range of engineered coating systems, an extensive range that remains popular today.

With many decades of experience under its belt, and three generations of the Nightingale family keeping the momentum going, Resene has certainly shown that kiwi ingenuity can win through delivering innovative and high quality durable products, colours and services.

Based on our history, the future is guaranteed to be just as colourful an adventure! 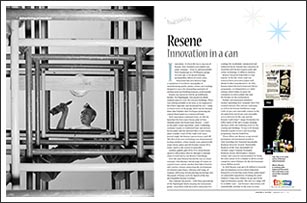 Resene – innovation in a can
from North & South magazine (PDF)

› Help us find our history – Please share your memories, photos and stories about Resene