Heave-ho, me hearties! Use bright Resene colours to create this pirate-tastic game.

To get the look: Use a tape measure as a rough guide when painting the balustrades and gang plank.

Other ideas for play: Play a fast-paced game of 'it' using a tennis ball - the sharks have to 'tag' each sailor with a tennis ball until one sailor remains - then everyone swaps sides and plays the game again.

› Learn how to play

Step two
Measure off and mask a one metre strip across the bottom edge and measure off the 'island' area at the top of the game. Paint the remaining 'sea' with two coats of Resene Tory Blue, allowing two hours for each coat to dry.

Step three
Create the 'ship's deck' by painting a one metre strip across the bottom edge using two coats of Resene Cinnamon, allowing two hours for each coat to dry.

Step four
Paint a strip of 'sand' around the island, as shown, using two coats of Resene Porsche. Allow two hours for each coat to dry.

Step six
Paint in the centre of the island with two coats of Resene Japanese Laurel, allowing two hours for each coat to dry.

Number of players: 10 or more.

How to play: One player is selected to be the pirate leader and one player is selected to be head shark - the remaining players are sailors on the boat. The shark takes their place in the 'water' and the pirate leader selects the first sailor to 'walk the plank'. The sailor is blindfolded and led to the start of the 'plank'. The sailor has to 'walk the plank' with the remaining sailors calling out directions (especially if they're getting too close to the edge!). Once the blindfolded sailor reaches the end of the plank, the other sailors call out 'stop!' and the blindfolded sailor has to jump to safety, landing with both feet on the island. If they land in the water (or walk off the plank at any time) they become a shark. The sharks are allowed to call out directions to confuse the blindfolded sailor. The game is over once all players have had a chance to walk the plank.

Project #6a Game Board 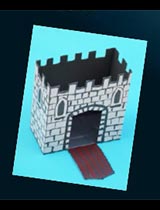 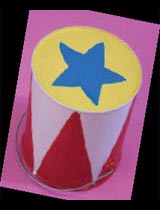 Up and down
Ground Games 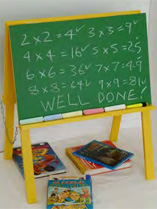