Clever use of space means this ensuite looks stylish not squeezed.

Here’s a conundrum – how do you squeeze a full bath, shower, toilet and basin plus storage into a long, skinny space just 1200mm deep, without the bathroom seeming pokey?

For Dave Strachan of SGA (Strachan Group Architects), the solution was obvious. “You use a removable wall. If you tried to put a single door between this ensuite bathroom and the bedroom, you would have tripped over yourself. But by adding a big, Japanese-style shoji screen you can slide the door right back out of the way, so you can get into the bath by walking straight through, directly from the bedroom.”

Dave explains that the whole house, with its tiny workingman’s cottage footprint of about 120m2 on a 300m2 section, was a bit of a logistical challenge.

The cottage had previously been burnt out and the owners Merv and Nancy Johnston, friends of Dave, wanted to include three bedrooms, good living spaces and two bathrooms when renovating. They also needed decent wardrobe spaces, which would take up additional space in each of the bedrooms.

The family bathroom was relatively easy as it was placed between two of the bedrooms with access from the hall. But the ensuite required a dedicated space beside the master bedroom. Here, the size and shape of the area drove the design ethic. Everything had to be carefully selected to fit into the tight spatial parameters. “With a small footprint, you have to look at how you use the space more efficiently,” says Dave.

Although the toilet sits tucked in behind the solid wall at one end, the sliding screens can also be positioned to give greater privacy.

As for the materials palette, Dave kept it simple, giving the space a clean, contemporary aesthetic with a Japanese edge. In keeping with the original turnof- the-century house, polished Kauri floors are continued into the ensuite. They provide a seamless look, merging the bathroom and bedroom as one. When the door is open, the bath seems to sit luxuriously in a corner of the room.

To complement the Kauri, European beech was used in the shoji frames and in the storage pod recessed behind the wall-hung basin. “Not only is it a material that’s compatible, stylistically, with the original but it’s quite stable which was important to give strength to the gridded sliding door.”

As there’s not much depth to the room, a mirror slides both left and right across shelves above the basin, revealing the European Beech behind. 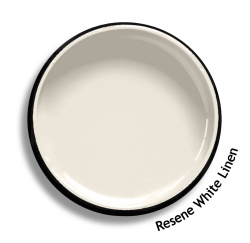 The square lines of the Kaldewai bath and the glass shower are framed in large format white tiles and all the other fittings – the Vitra basin and toilet pan – are white. The rest of the room is painted soft white in Resene White Linen, which matches the rest of the bedroom. A pair of Skope heated towel rails against a white tiled wall create an interesting sculptural effect.

Homeowner Merv says: “Some people might think it’s a bit strange having the bath in the bedroom, but for us it worked out really well. It was Nancy’s idea to have the bath in the first place and it proved to be fantastic. Anyway, if you don’t like the bath on show, you can screen it off when it isn’t in use. Nobody would know it was there.”

And a good ducting fan means steam is never an issue.