Resene are supporting the Lions New Zealand to raise money for kiwi kids. Dig out any unwanted old currency or foreign currency and drop it in to your local Resene ColorShop. 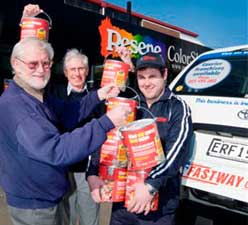 Fastway Couriers have kindly offered their services to ferry the money around the country. Thanks Fastway! 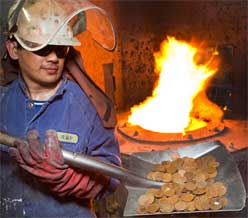 Coins being melted down.

New Zealand Lions Clubs have come up with a blindingly simple campaign to collect old coins and banknotes, foreign currency and hoarded loose change for the benefit of young New Zealanders. Lions have teamed up with Resene, which is offering its nationwide chain of Resene ColorShops as collection centres and is helping to promote the appeal.

New Zealanders also have a tendency to hoard current coins and the Reserve Bank would like to see an estimated $36 million back in circulation to avoid incurring unnecessary costs of minting new additional money, Mr Hayes said.

“In addition there must be tens of millions of dollars in foreign coins and banknotes that find their way back to New Zealand,” he said “We want New Zealanders to dig it out so Lions can give it away to organisations and charities that support young people.

“The old decimal money that is no longer legal tender can be redeemed at the Reserve Bank and when the foreign currency is sorted it will have a value with dealers or will be recycled,” he said.

There are 11,642 teachers from 1550 schools who have been through the Lions Quest training and reaching over 250,000 students.

“Money will go to these programmes and to outdoor education programmes that Lions already support, such as Sir Edmund Hillary Outdoor Pursuits Centre, Duke of Edinburgh Awards, Spirit of Adventure and Outward Bound.”

Outdoor education introduces young people to the great New Zealand outdoors and in many cases offers life changing experiences that will remain as lifelong influences.

“We want to make a substantial investment in New Zealand’s most precious asset and provide a springboard for good Kiwi kids to become amazing New Zealanders of the future,” Mr Hayes said. 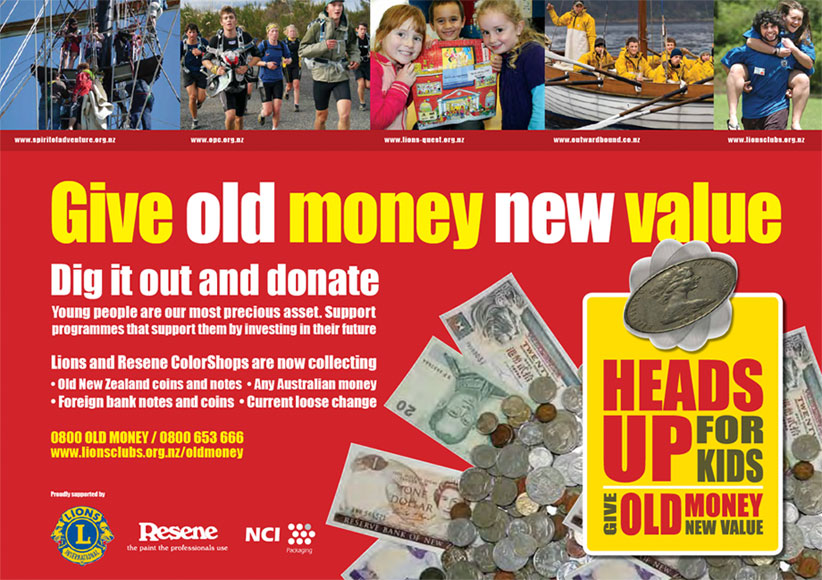 In the past month communities across the country have cleared out drawers and searched their sofas to collectively donate more than 2 tonnes of obsolete cash for Lion Clubs’ project Heads Up for Kids.

The two tonnes of cash, made up of old New Zealand and foreign currency, was dug out and donated following the project’s National Awareness Week in April.

“We’re delighted with the results. It goes to show that every little bit can make a big difference,” says Lion Club member and Heads Up for Kids currency processor Roy Peterson.

“We are currently processing the coins and banknotes, and estimate the value to be close to $50,000 in legal tender.”

Old and foreign currency has been donated from Northland to as far south as Invercargill. Over 600kgs alone has come from Auckland area and the Queenstown community has gathered more than 150kgs.

“Some of the coins date back to the 1700’s, and we’ve received old 10 shilling notes and currencies that are no longer in circulation. It’s amazing what people have stashed away,” Mr Peterson says.

The donations made at various collection points, such as Resene Colorshops were collected by project sponsor Fastway Couriers and delivered to the Heads Up for Kids HQ. Once compiled, the cash is processed into dates, types and denominations and then redeemed for legal tender. These funds are then used to support young New Zealanders to attend programmes that help them to build confidence and develop new skills.

“It’s important our young people are recognised and given opportunities that boost their confidence and provide a springboard for them to grow into great New Zealanders of the future,” says Mr Peterson.

“That’s one of the great things about Heads Up for Kids, it turns something people don’t use into memorable and life changing experiences for young people.

We [Lions Clubs New Zealand] would like to thank New Zealanders for supporting Heads Up for Kids. This old and foreign currency will make a big difference in the lives of our young people.”

From the Reserve Bank of New Zealand

26 tonnes of coins and counting

Still finding old and foreign coins in your purse and pockets? Bring them into any Resene ColorShop and help bring amazing opportunities to Kiwi kids.

Heads Up for Kids is a charity that collects obsolete money, redeeming it for New Zealand dollars and funding education programmes for young Kiwis who would otherwise not get the opportunity.

Since 2010, the Lions Club NZ has run Heads Up for Kids, helping more than 100 kids to become involved in leadership opportunities, including scholarships to Spirit of Adventure and Sir Edmund Hillary Outdoor Pursuits Centres.

You can donate by simply taking in your old money and foreign currency to any Resene owned ColorShop (NZ only), and anywhere you see a Heads Up for Kids collection tin. To donate over the phone, call 0800 OLD MONEY.

Remember when you come in, also bring in any unwanted mobile phones for the RE:MOBILE programme to help Sustainable Coastlines. And bring in your old unwanted paints to the Resene PaintWise service.